Grand Prismatic from Above. Yellowstone, WY 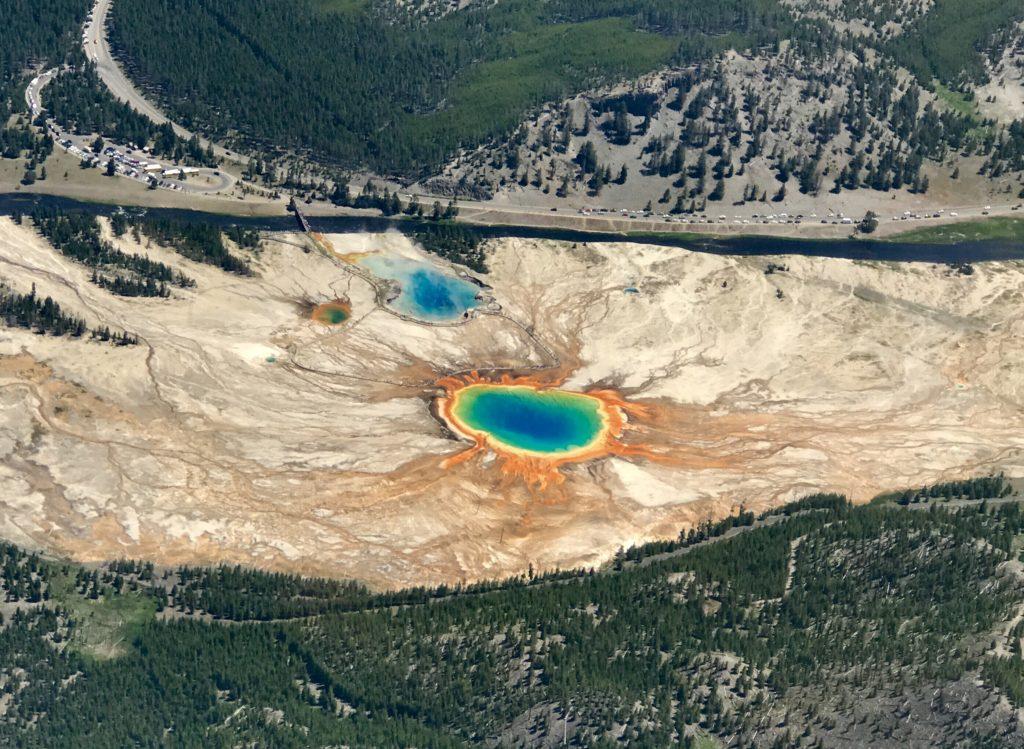 We took off from Oakland (CA) at 11am after waiting for the marine layer to clear out.

On the way north, we had a nice view of Pyramid Lake (NV)

and the empty playa of the Burning Man (NV)

and landed at Winnemucca Municipal Airport (KWMC). The runway is very hard to spot in the middle of the desertico terrain, keep your eyes outside the window to look for it. At the airport you can refuel your plane with cheap gas, and there is a very tiny FBO with AC selling all different types of ice-creams. It’s a must stop especially in the hot summer days.

After an hour break, we took off and flew over the Lower Salmon Falls Creek Wilderness Study Area (ID).

We got to Idaho around 6pm, the sky was overcast with clouds at 12K feet. Luckily I had my portable ADS-B receiver (the Stratux) and I noticed cumulus clouds over Yellowstone with raising thunderstorms. So we decided to change destination and stop for the night at the Idaho Falls Regional Airport (KIDA). Typically clouds in the desert of Nevada and Idaho start building in the early afternoon. The weather typically changes from clear to overcast very quickly, with thunderstorms building up in the late afternoon and night. In this area they recommend restricting your flights to the morning hours.

The next day we woke up relatively early, took off from KIDA and within an hour we landed at the Yellowstone Airport (KWYS). One of the perks of this airport (besides the very long and well maintained tarmac) is the FBO’s campground reserved exclusively for pilots: you can install your tent, spend as many nights as you like for free and use the FBO’s amenities.

The campground is very quiet, a short ride by car to the National Park and it’s the only campground in Yellowstone that is surrounded by fences so bears cannot get in.

At the FBO you can also rent a car. Call in advance before arriving to reserve your car.

I will not use too many words to describe the beauty of the Yellowstone National Park (WY). The following pictures are a little taste of it

On July 4th, Independence Day, we departed to Oakland.

We took off from KWYS around 12pm. Again that’s not recommended, better to fly early in the morning to avoid overcast skies and thunderstorms. The first thing we did was flying over the Yellowstone National park. There are some flying restrictions, ask the FBO. One of the highlights of the entire trip for me was the view of the Grand Prismatic Spring from the plane

On the way back, we flew over the Grand Teton National Park (WY)

and landed at the Magic Valley Regional Airport (KTWF). Besides cheap gas, they have a very nice FBO with AC and a large kitchen. The FBO was so comfortable that we waited way too long before taking off, and cumulus clouds started to build up. By the time we crossed the boarder from Idaho to Nevada, the sky was already overcast with rain.

Luckily my portable ADS-B receiver helped me once again, and by looking at the radar information on my iPad, I took a long detour (see map below) and flew around clouds and rain. Then I landed for refuel at Derby Field (KLOL) where visibility was very limited due to a large fire on the mountains nearby

We hit another fire as we approached Lake Tahoe, so we had to take another detour by flying north of Reno, rather than crossing the Sierras over Tahoe. Finally we landed at KOAK around 8pm.

Here’s the full itinerary of the flight

What a fun adventure!